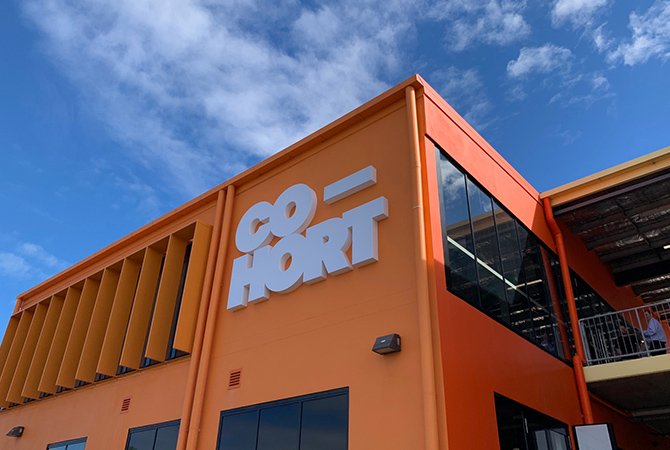 The co-working sector will get a massive shot in the arm when a new startup incubator and shared working space opens next year on the site of the former Commonwealth Games Athletes Village.

Cohort, which will be managed by Southport-based CoSpaces, will be the first commercial space to operate out of the former athletes village when it opens in April.

The space, which spans 2500sq m across three interlinked buildings, is only the beginning of what Economic Development Queensland has planned for the Gold Coast Health and Knowledge Precinct.

EDQ foresees 175,000sq m of offices and commercial space to be built across multiple buildings in the 200ha precinct during the next 10 to 15 years.

An artist impression of the Cohort co-working space and startup incubator at the Gold Coast Health and Knowledge Precinct.

To put that into perspective, 175,000sq m is slightly less than the Southport and Broadbeach office precincts combined.

CoSpaces CEO Ben Howe described Cohort as a mix of co-working spaces and innovation programs with a health focus.

There will be meeting rooms, event spaces and private pods in addition to offices, all designed to foster networking, innovation and collaboration.

Mr Howe said Cohort’s launch was significant because it would help EDQ gauge interest in the precinct.

“This will give people a taste of what is to come … we are the first piece of the puzzle,” he said.

Mr Howe said the facility, which will have 160 desks for rent or lease by April but capacity for more than 300, is a departure from CoSpaces’ previous ventures due to the inclusion of the incubator.

“I am really confident it will be a success,” he said.

“The formation of dedicated areas for technology and innovation is crucial to the Gold Coast’s coming of age. It won’t happen overnight. It’ll take a good part of one to two years to get to full capacity.”

Mr Howe said the average period of time for a co-working space to reach capacity was 18 months.

He said the fit-out would be completed during the next three to four months.

State Development Minister Cameron Dick said the precinct was a 10-to-15-year project that will add 12,000 jobs and $1.4 billion to the Queensland economy.

“We want to ensure there are spaces available for a range of businesses in the precinct, from large global knowledge operations through to small local startups,” he said.

“This presents huge opportunities for the Gold Coast and Queensland as a whole.”

“Start-ups are crucial to creating jobs on the Coast. That’s why we’re committed to making this precinct a world-leading hub for new ideas,” she said.

“We’re investing in projects like this to diversify the Coast’s economy and to ensure our investment in the Games continues to pay off.”

Cohort will be housed in buildings that were home to the hair salon, convenience store and police station of the athletes village.

The health and knowledge precinct is jointly funded by the Gold Coast City Council, the State Government, and Griffith University. It aims to be a hi-tech industry development for research collaboration and the jobs of the future and is supported by $5 billion in infrastructure spending.

This article was originally posted on Gold Coast Bulletin by Alister Thomson.

Read the article in full here.